The following report was first published in a newspaper in 1914, just after Howard Pixton had won the first Schneider Trophy Race.

On April Fool's Day 1914, an anxious team of British engineers, handlers and aviators tested the new float system on their entry for the second Schneider race. The little biplane was positioned at the end of a high water jetty on the Hamble river as the tide came in. The pilot, Howard Pixton, climbed into the cockpit and started the engine. The tide was within six inches of the jetty. The team pushed the aircraft over the edge.

As Pixton started to taxi, the aircraft promptly cartwheeled proving that the main float had been fitted too far aft. Pixton was flung clear. The aircraft, a Sopwith Tabloid, sank, drifting upside-down out into midstream. The disconsolate team eventually got a rope on it, and the next morning dismantled the sodden, buckled machine, now stranded by the tide, balancing on its nose with its tail in the air. Redesigning and rebuilding would have to be fast. A fortnight later the Sopwith Tabloid was unpacked and reassembled in the team tent at Monaco. It was the smallest and lowest-powered aircraft in the race, and the French, feeling secure in their dominance of world aviation by this time, ridiculed the British team as they laboured over the still rusty engine, refusing to believe the rumours that the little biplane had already achieved 92 miles an hour in tests.

Early on Sunday 19 April, the French began to look more thoughtful after watching the Tabloid's test flight. The aircraft had clumsy makeshift floats and a peculiar 'sit' on the water. However, its take-off was smooth and swift compared with the sluggish performance of the French mono-planes. Monday 20 April, was race day. Under the rules, each competitor had to make two alightings and take-offs during the first lap though these could be in the nature of a landplane's circuits and bumps, without stopping. The two French Niueports were first away, followed by an FBA flying boat flying for Switzerland. The FBA excited the crowd with a long, porpoising take-off, beginning with a series of hops and finally bounding and ricocheting into the air.

Pixton took off in the Tabloid a quarter of an hour after the two Nieuports. Opening the throttle, he was accelerating rapidly as he crossed the starting line, and his floats actually left the water only 50 or 60ft beyond it. There was a moment when the machine faltered, the floats bounced once on the water, and then the little biplane was climbing strongly away, heading into wind down the long leg of the course towards Cape Martin. At the sharp turn Pixton banked steeply. Then, with very little reduction in speed, he came down low and his floats kissed the water twice. It was a beautiful piece of flying, and the Tabloid seemed to be slowed by the contact hardly at all.

The Sopwith biplane was obviously faster and more manoeuvrable then the monoplanes. At the announcement of its first lap time, the crowd whistled in amazement. Pixton had taken 4 minutes 27 seconds, half the best French time.

By the halfway stage both French Nieuports were having engine trouble from the strain of chasing the Tabloid as the rear banks of their twin-row Gnome engines heated up. Both ended up with seized pistons, leaving the race to Pixton's Tabloid and the Swiss FBA. 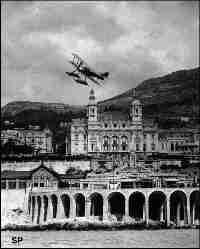 Some participants, disheartened by the Tabloid's apparent supremacy, had refused to start the race. They began to think again when, on his 15th lap out of the required 28, Pixton began to suffer misfires in one of the nine cylinders of his 100hp Gnome Monosoupape' rotary engine. Pixton's lap times now began to rise a few seconds at a time. For six agonising laps the drama went on. One by one Pixton ripped out the drawing pins which were his crude lap counter. Then the Gnome settled down on its eight good cylinders and the lap times improved again. Throughout the final lap Pixton and the Sopwith Tabloid were applauded. With an average speed of 86.78 miles an hour they had beaten Prevost's true average of the previous year by 25 miles an hour.

Manx Aviation in War and Peace published by kind permission of: The Manx Experience