An 1857 print of the area which became Ronaldsway airport, looking from a hill to the north of the site. The buildings of King Williams College, now bordered on two sides by runways, can be clearly seen in the middle of the print, with Castletown on the right, and the Tower on Langness peninsula shown on the left.

While early fliers to the Isle of Man made use of any suitable farm field or stretch of flat ground, the large field at Ronaldsway came to be adopted as the favourite landing ground for visitors both private and commercial. The field belonged to the Ronaldsway Estate which stretched from Santonburn in the north to Derbyhaven and included all of the Langness peninsula. The flat beach of the area became a natural landing place for Vikings from where they could supply their Keep at the mouth of the Silverburn River. Ships beached on Castletown Bay could be transferred across the narrow neck of land to the sheltered waters of Derbyhaven by being dragged over a ship track which became known as Reginald or Ronalds's Way. Here, too, were fought many an internecine battle between warring Viking factions and, close to the field in question, Magnus Barfoot was defeated by the Manx in an attempt to claim the island Kingdom following the murder of his nephew, Reginald 11.

Derbyhaven takes its name from the feudal Derby Lords of Mann who built a breakwater and made it the main port to the Island, convenient for Castle Rushen, their centre of administration.

After the Viking period came to an end in 1275 the land of Ronaldsway came under control of the influential Christian family of Milntown, near Ramsey. In 1643 Deemster Ewan Christian, asserting his rights of land tenure over the Seventh Earl of Derby, bequeathed the estate and Ronaldsway House to his younger son William, who is remembered as Illiam Dhone the Manx patriot. During the Civil War he was appointed head of The Manx Militia and used his position to lead a revolt against the Seventh Earl. For this he was shot in 1651 on Hango Hill within sight of his Ronaldsway home. In more modern times the estate came under the control of the Crookall family. Once commercial operations became established, the original small fields were amalgamated to provide a larger landing area. At this time the road from Douglas to Castletown passed along the eastern boundary of the field and through Derbyhaven, hence the terminal buildings and offices were set up on the south side of the airfield. 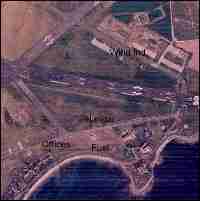 The colour image is a section from a 1995 aerial photograph, showing the original area as it is now, annotated similarly to the previous map.The crescent at Derbyhaven remains mostly unchanged, although the booking office and the workers cottages were demolished to make way for the runways in 1942, as was the Ronaldsway Mansion House, the site of which is now occupied by a Turbot farm. However, many of the farm buildings survived, and are still in use.

Manx Aviation in War and Peace published by kind permission of: The Manx Experience